The Usual Suspects met for a great Christmas lunch at  the Three Mariners and long distance member Mellony brought the quilt school staff members had made under her direction as a fundraiser. Utterly delightful.
Meanwhile at the U3a Margaret shared lots of tips for using masking tape and in the course of the morning came up with another, stabilising bias seams.

Margaret's Tips: she warned us to use the special quilters’ version for ¼” and 1/8” as the “Wilkinsons” version will not be accurate but she also uses wider and very wide versions of these. A piece of wide masking tape in a loop inside out next to the machine is a useful resting place for all those thread scraps. A loop of narrower (1”) around fingers can be used to pick up threads. You can mark the position of blocks and pieces by writing 1-1 or A1 etc on a scrap and sticking it onto the block. Masking tape is reusuable and can give you a convenient line to follow for machine or hand quilting.

This morning we went into Canterbury to the library and to make one or purchases but remembered too to go into the Close to view the crib by the Cathedral door. There have been two programmes about the life of the Cathedral on TV and the last one is tonight. Watch out for falling masonry!!


Posted by Quayquilter at 17:17 No comments:


The reason I like this bag is because to make it 3D you cut a 2" square at each bottom corner of the side panels. I have noticed the same technique on other bag patterns but this was my first encounter and I thought it brilliant!
When I made my first bag a friend commented "Oh you haven't covered your seams" - we are that kind of friends. It hadn't occured to me one could or would but now I like to cover mine as well. So that was a good friend.

Posted by Quayquilter at 12:30 No comments: 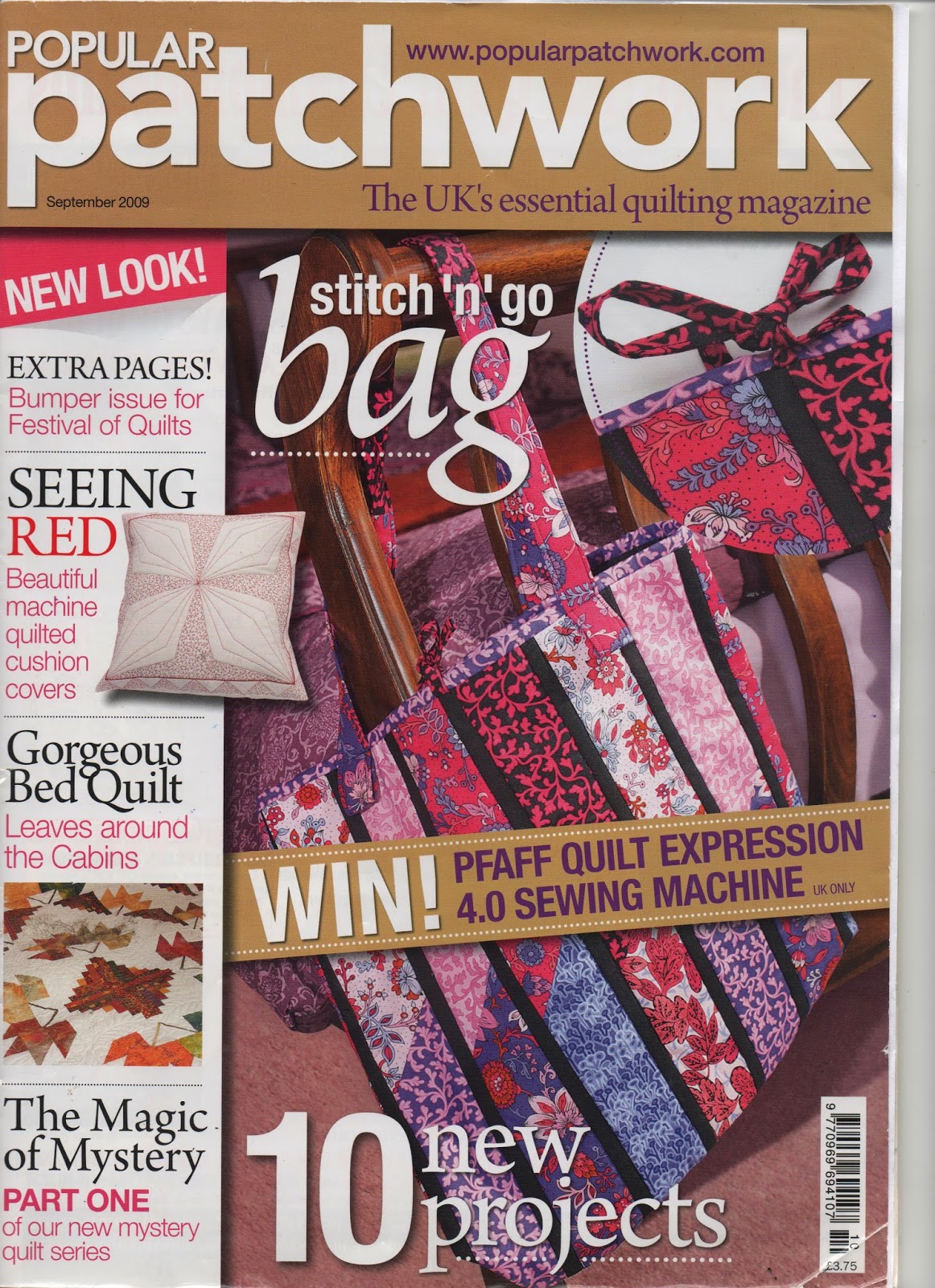 Along with U3A patchworkers I have been making bags based closely on a Sally Ablett pattern from Popular Patchwork September 2009 p.36 and shown on the front cover. It uses lots of fabrics hugger mugger from a Fabric Freedom line. This has become my most used bag making  method and I've made lots, not necessarily using strips, for tombolas and fund raising tables. In the first session we learned about joining strips at a 45 degree angle, also useful for binding strips and strippy QAYG.


Posted by Quayquilter at 15:33 No comments:


Here are the U3A patchworkers showing off their runners while Penny brought hers to Oast to show me. Well done everyone. This Jeanne Gentry project from British Patchwork and Quilting magazine has proved very popular with everyone. I did, however, redraft the heart wreath with compasses and a Masterpiece thread spool!
Still with the U3a my co- tutor, Margaret, made the winning entry for the Oast challenge, far ahead of the other entries with her exquisite piece "A Touch of Gold". It was interesting to see other interpretations of the "Take Five" theme. I liked the second runner up of the workman taking a break! 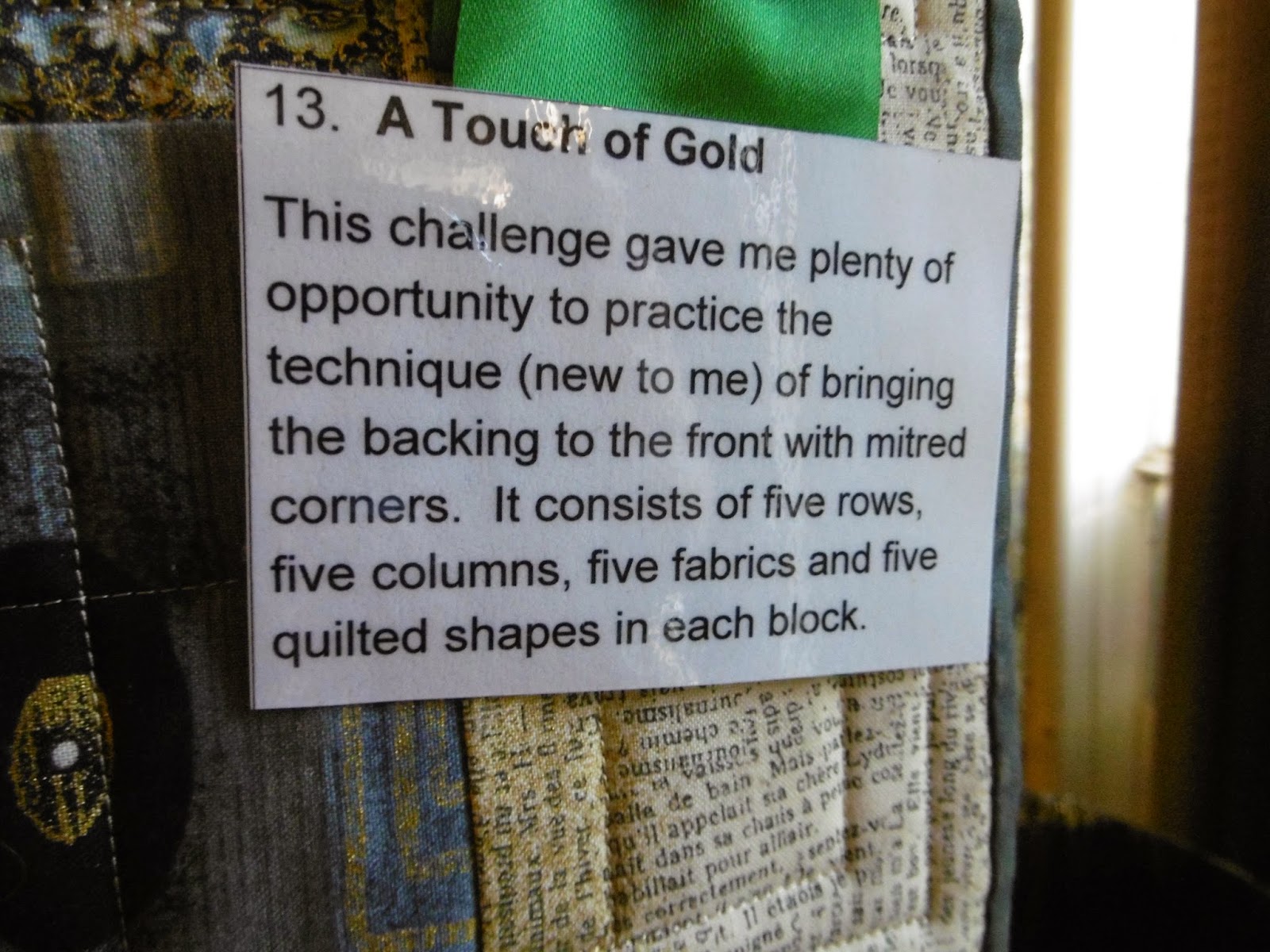 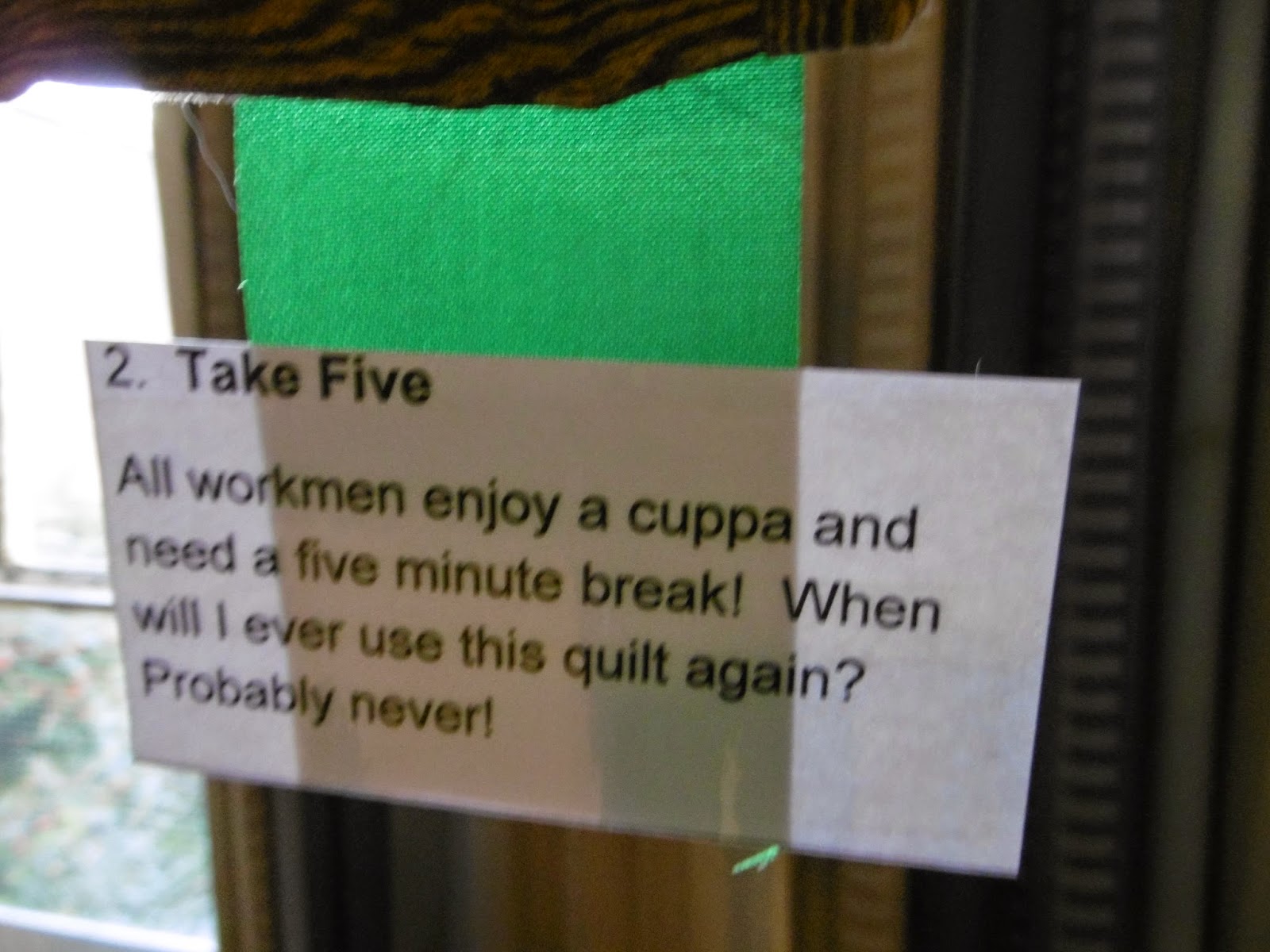 Today was the Quilters' Guild Stash Sale which raised money for the Guild and gave folk (not me!) a chance to sell surplus fabric. It was good to see U3A class members turn up to give support ie spend some money on very reasonably priced fabric! I helped sell someone else's stash and was reasonably disciplined about adding to my own focussing on blues for the next Bonny quilt project.
Posted by Quayquilter at 16:28 No comments: