One I made earlier 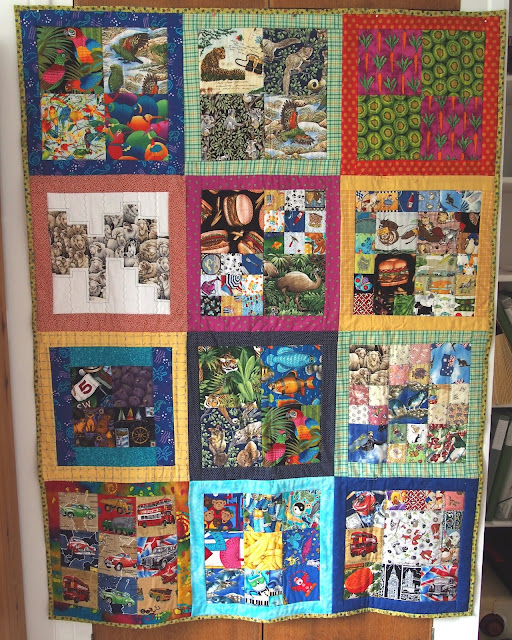 This is another novelty Linus quilt made from blocks sewn by friends, students and myself. Here the blocks are joined using frames. I hope a child will derive pleasure from looking at the multitudinous subjects depicted. 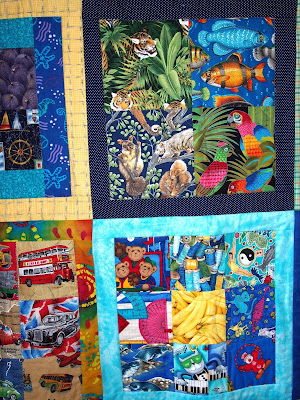 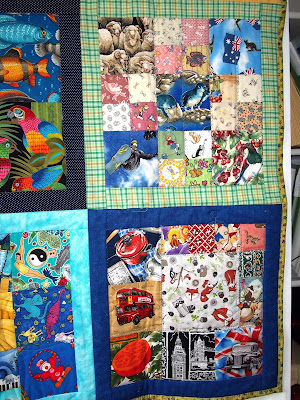 Posted by Quayquilter at 13:50 No comments:

As I am doing the Piece of Cake applique along with friends I need to keep up the momentum with that. As I can't get on with needle turn I have to prepare and press patches which is more time consuming and I am prequiling my blocks; both these processes seemed too hard  in my more poorly state but I am now coming out of that tunnel and sat down at my machine for the first time since early May to quilt the triangle pieces which frame the central on point medallion. Choosing the fabric combinations was the most time consuming part though with quite a few rejects. I also had to change out the centre of the large circle on the medallion as I didn't like my first choice. I'll have to be more gung ho when I get to the blocks otherwise the quilt won't be finished in this life!


Joseph's Coat is much more straightforward though even there I have to unpick because I have two blocks with the same fabric adjoining.


Posted by Quayquilter at 12:09 No comments: 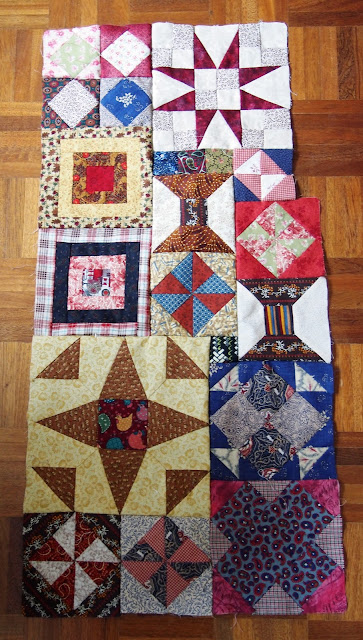 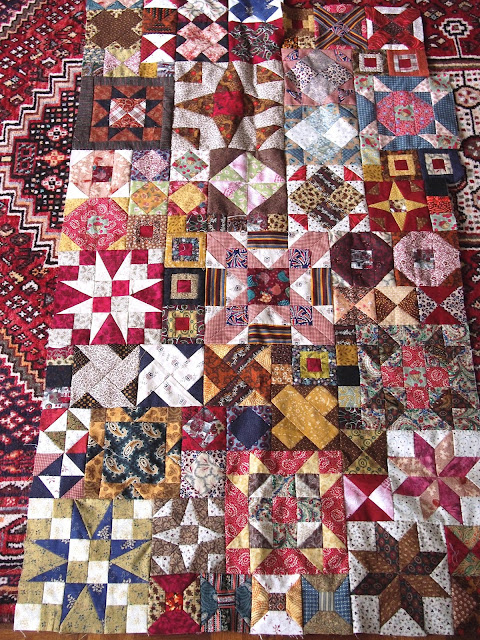 My handsewn project continues to grow. I was a bit concerned that some of my 9" blocks weren't entirely suitable but spaces were allocated so I've made 3 fresh blocks, all 8-pointed stars. 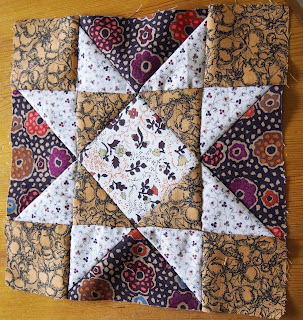 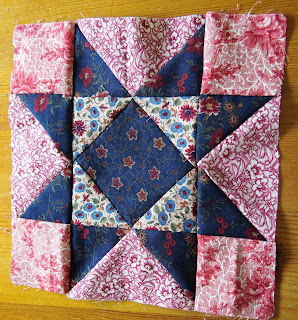 Very unexpectedly I won three rosettes at Sandown - Traditional Patchwork, Sampler Quilt and Judge's Merit. I hope I wasn't the only contender but as I am not able to attend because of the sprained back (very much better now, though) I shall never know and intend to smugly gloat. I like to put traditional/bed quilts in shows because that is what I want to see and I like to take pictures of them hanging up. Friend Belinda kindly sent me these:

The day of my in-house workshop day dawned at and alleluia I felt better than I have done since the back sprain happened. At last I am returning to normal. So I was able to demonstrate the cutting and pinning and display the quilts just fine and go and visit people as they worked as long as I had a chair to land on. It helped that Petham Village Hall was so well lit and new and that dear friend Judi was the hostess. She made me a lovely lunch and helped with the cutting across the full width.  Her sister Joy and friend Ingrid transported stuff to and from her car. In turn the students, a lovely class, helped each other through the cutting stages and went on to make some lovely blocks though not all of them are here.

Well over a decade ago I started hand piecing blocks in multiples of 1.5" yielding sizes of 3",4.5",6",7.5" and 9". Over time I have amassed a basketful of these. Later I machine pieced a whole batch of Farmer's Wife blocks though I don't think I will need to draw on them hardly for my quilt. I initially worked out a quilt size, then the total area in square inches, then the area of each size of block and kept totalling these up as I went along. Anyway Now I no longer have a divan bed but a bedstead I've amended the width to 51 sqs by 54, a size of 76.5 by 81" so I'll have some blocks  leftover at the end.
I made a plan dividing the top into blocks and made my first section.. Then I decided that was too regimented and I wanted the different size blocks to dovetail more so I started again dropping nine patches across the surface, then 7.5s and 6s and finally filling in with the two smaller sizes and single squares. It will involve a lot of partial piecing but hand piecing makes that easier. I'll make out a section, sew that, join it and them move to the next choosing the blocks from my piles as I go. It will be fun.

My time in Berlin ended with a back injury which in turn affected my left leg so I have been lying low for a bit. Last weekend was the Oast Quilters' Show but I couldn't walk well enough even to see my own two quilts hanging up and photograph them and there were so many beautiful ones that I didn't get to admire. Great that friends Maggie and Tracy won rosettes for machine quilting and visitors' choice second place. respectively.
Today has been a good day - largely pain free and it was the bi-monthly sewing and lunch get together for 11 quilters so I enjoyed good food and good company plus the lovely work of my friends. Also Judi had bought three splendid Amish quilts she had purchased at a Pennsylvanian "mud sale". I hand sewed and will share in a future post.