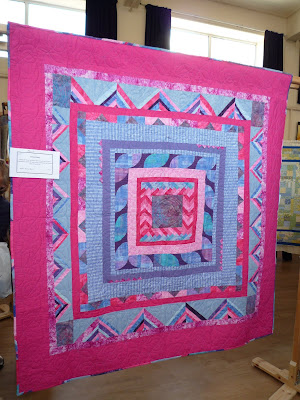 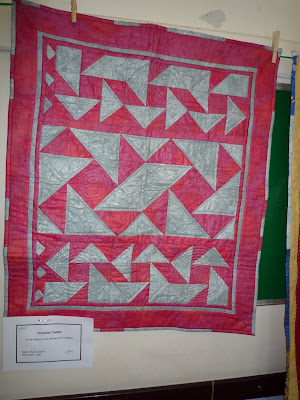 On Saturday I went to the Dragonflies Quilt Show in Deal, Kent. They have a lot of youngish members and the show reflected a certain joie de vivre. I met my friend to hand over her Little Gem but was a bit flustered so forgot to take a photo but judging from her quilts I chose the right one as quiltwise at least she's "in the pink". As I stood by the smaller one two people were exchanging nice comments about it - "pink and grey, unusual I must remember that and those 3D triangles are nice, aren't they." I thought so too!
Posted by Quayquilter at 20:36 No comments: 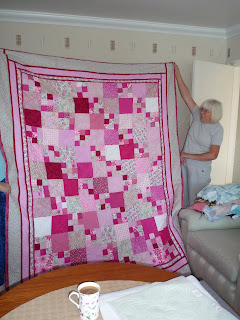 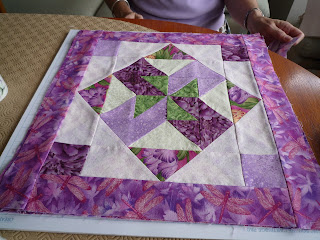 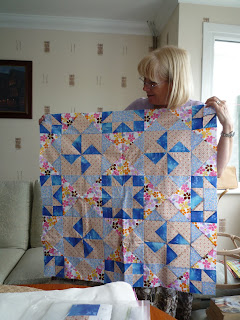 At our meeting of the Log Cabin quilters Trish brought her completed mystery top, a lovely surprise as I'd forgotton which fabrics she'd used and the combination looked good. the completed Patchwork Party block is hers too while Mavis brought in the quilt made for a granddaughter using leftover pieces from her Houston Stars quilt.
Posted by Quayquilter at 23:15 No comments: 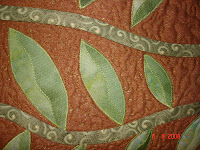 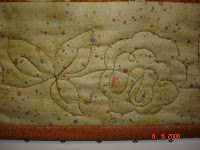 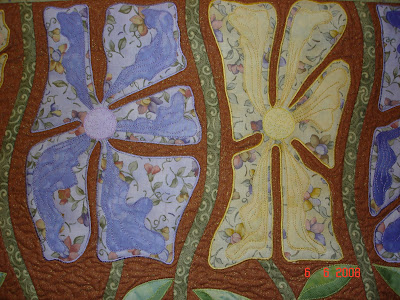 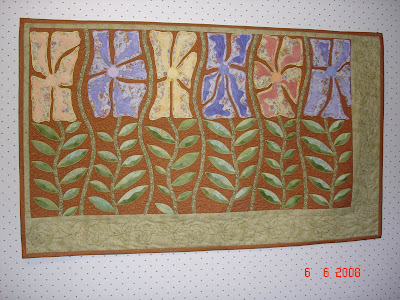 The little A4 piece doubles my contemporary quilt collection though I have two older quilts. My other purchase was from Jennie Lewis's gallery at Festival of quilts last year. I'm not sure of the title but it's the theme of pretty maids all in a row from the old nursery rhyme about my namesake and Jennie is someone I've been on retreats with. It's on my sewing room wall.
Posted by Quayquilter at 20:04 No comments: 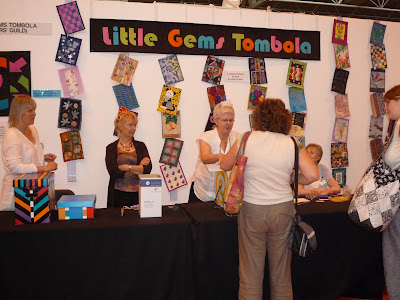 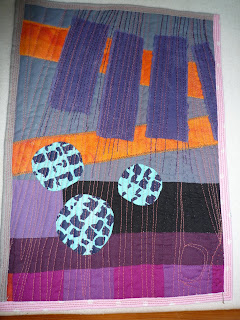 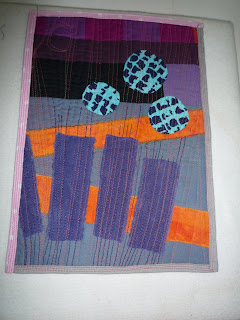 At the Festival of Quilts which I attended last weekend the Quilters' Guild held a "Little Gems" tombola where you had the chance to win an A4 quiltlet donated in aid of the St Anthony's Quilt Centre and Museum. Someone I met had won four including a beautifully quilted, trapuntoed and corded one by Philippa Naylor. Mine was by Carol Mowat someone whose work I have noted at Quilt Shows. I also won one for friend Monica by Margaret Cooter, a presence on the British Quilt List. I'm going to deliver it to her today at The Dragonflies Show in Deal, Kent, UK. The organisers started with 1600 pieces and more came in as the show progressed; they were divided up into the four batches one for each day and all were gone by the end, a super way to raise money, enjoyed by makers and winners alike.
Posted by Quayquilter at 09:49 No comments: 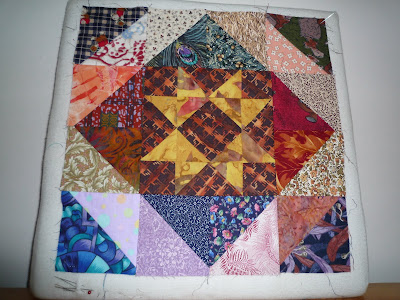 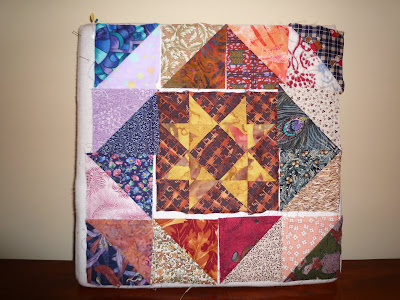 The comment on the previous post hit the nail on the head. I thought about leaving it as a teaser but feel the quilt will be so OTT anyway in terms of fabrics, colours and variations in value as my lights range from medium to very light and the darks likewise from medium to very dark that further complications would just be annoying as well as confusing. So I've redone the block.
Posted by Quayquilter at 13:54 1 comment:

One step forward two back 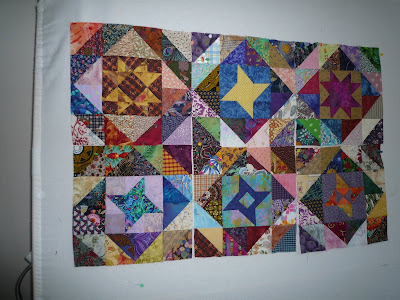 Look at my latest KG block when set with earlier ones. Something is wrong.
Posted by Quayquilter at 22:23 1 comment: 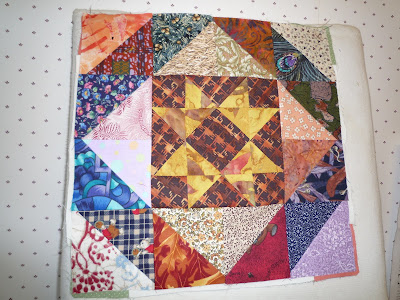 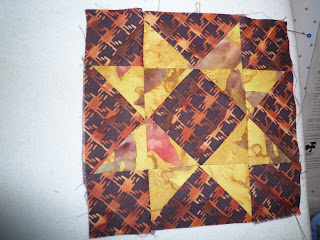 I made another Katherine Guerrier block partly as a leader ender while working on the U3A quilt.
Posted by Quayquilter at 20:59 No comments: 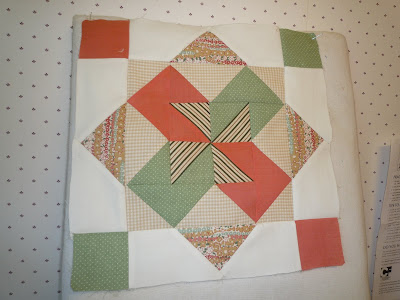 I made my third PP party block yesterday afternoon - a slighly odd design which I changed slightly as the green and coral corner blocks should be in alternate positions but I decided to maintain the diagonal look.
Posted by Quayquilter at 15:35 No comments: 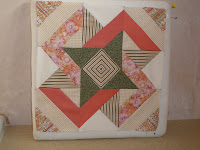 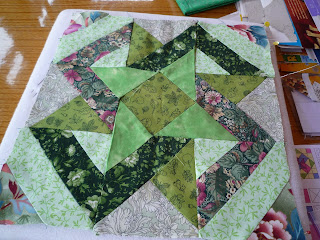 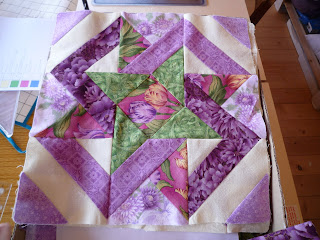 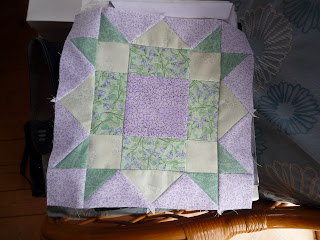 We met in the log cabin yesterday and produced the blocks we've been working on, Alison's in pretty pastels, Trish's in purple and green, mine in orangy colours and Mavis's in green, green and more green!
Posted by Quayquilter at 22:17 1 comment: 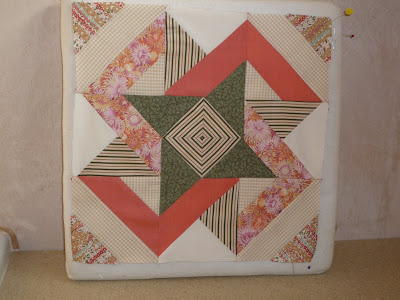 Last week we met in the log cabin to cut out our next Patchwork Party block a real stinker! It was designed by Marti Michell for use with her tenplates and I have the basic set which makes things easier. Choosing fabrics was not so easy and I have enough rejects for a couple more blocks so lets hope these shapes repeat themselves later in the project. As for sewing I didn't have a plan except to do the four side centre squares but otherwise just kept going till it all went together. Now I like it and visit my sewing room to gloat.
Posted by Quayquilter at 19:48 2 comments: 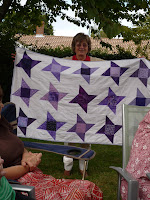 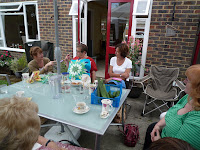 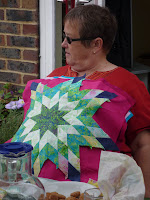 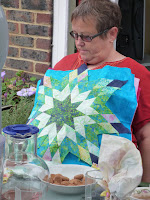 This week I went to a garden party of a group I visit every other year or so to sew and work on charity projects which I set for them. So it was nice to be invited to a lovely lunch and share some time with them. They make friendship quilts and the lucky winner is pictured here with her quilt. Also we tried to decide whether the turquoise or fuchsia background was best with these super stars. I think the turquoise harmonises better but the vote seemed to go to the fuchsia pink.
Posted by Quayquilter at 19:53 No comments: 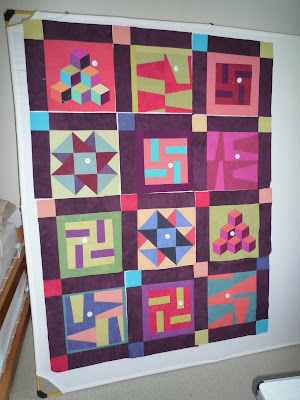 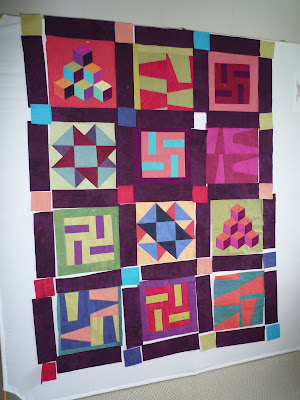 I've made a start on combining the blocks the U3A novices made into a quilt and created problems for myself in the urge to "get on". I meant to quilt the blocks individually and join into horizontall rows with vertical sashing pieces and then join these with horizontal sashing but somewhere along the line forgot so I now have sashed squares and oblongs. I can manage quilt as you go but it will be tricky. I shall still use this method as the blocks will still be easier to quilt this way.
Posted by Quayquilter at 08:57 No comments: 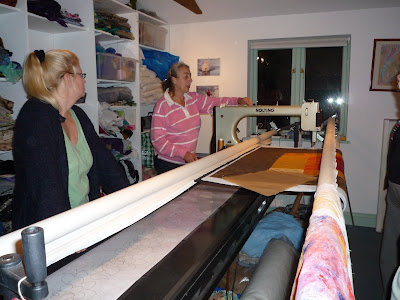 Last night we went to Alison's of "Smart Frog" to take the Oast Quilters' raffle quilt to be longarmed. We chose pattern and thread and look forward to seeing the result. Once it's bound and been shown at the Oast Quilters' Open Day I'll post about it. Reactions to the top haven't been particularly enthusiastic but we like it very much. It's been very well made and is in classic country colours.
Posted by Quayquilter at 14:04 No comments: