After piecing over papers and doing my version of block patchwork for many years I finally went to the Quay Quilters' Show and signed up for a beginners sampler class. I am so grateful for what I learned there - we drafted our own card templates with the aid of rulers, set squares and compasses and although I rarely do this now I value the understanding this gave me and still use it for blocks with odd shaped pieces. However my blocks have lain undisturbed since 1995 while I was wielding rotary cutters and foundation paper but as the to do list has thinned I have got them out. They seem very old fashioned and because fabrics have changed so much in the intervening time it's hard to know how to sash them. All the candidates I tried weren't right for some reason though a friend today suggested navy which is a possibilty.  However I like them side by side  and think I will opt for this though 60" isn't very big. I might have a border fabric which I'll cut quite wide.
The pieced duck will be a label on the back.


Posted by Quayquilter at 16:54 No comments: 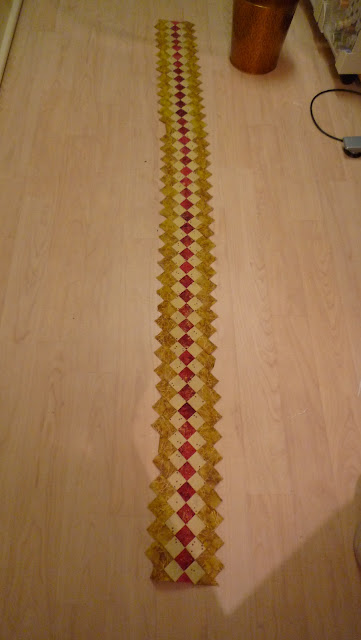 I've been out at Crab & Winkle today where we are making crackers/table mats on a Christmas theme. I had forgotton half the stuff I needed but had planned to use seminole bands so I set to with a will and this is the result. I now realise making a quilt with seminole strips or a border is not far out of reach. Anyway I should have enough for a set of place mats!

At Quay Quilters on Wednesday Brenda Todd came to show us her quilts and talk about them. She had used such a variety of techniques and made such inspired use of fabric we were all very impressed.


Posted by Quayquilter at 20:49 No comments: 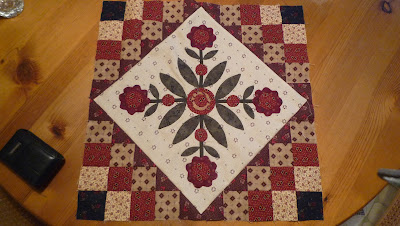 We four Bonnie Quilters are all making a medallion quilt, keeping determinedly in step from meeting to meeting so the centre block was our first assignment and after cutting out the squares at our last get together I've sewn them together in readiness for next week.

Members of the Guild from the East Kent area enjoyed a lovely day celebrating the birthday of the Quilters' Guild by sewing, showing and telling, holding a grand raffle and eating a beautiful iced cake. A special highlight was the viewing of the Contemporary Group's suitcase collection which were held up up (with gloves) and shown round and then laid out for closer study - lots of clever people out there. The theme was childhood memories.

Posted by Quayquilter at 23:06 No comments: 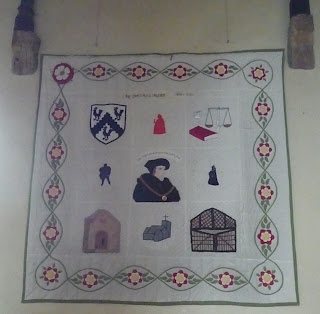 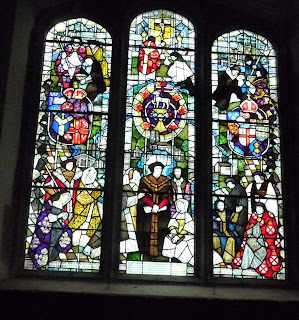 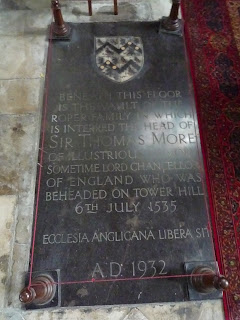 While waiting for the bus to Faversham we popped in St Dunstan's Church, Canterbury. Sir Thomas More's daughter married  one of the Roper family who are buried here and the remains of whose house stand opposite. After her father was executed Margaret retrieved his head from the stake and had it interred here in the side chapel. A window celebrates his life and a quilt hung on the wall. As it happens we could have lingered much longer as the bus only three stops away from the bus station was 20 minutes late. This is the last day of going by bus for some time as we spent 1 hour 5 minutes waiting for three delayed buses plus the time we waited before they were due. Not good enough. It was from St Dunstan's that Henry II set off clothed in sackcloth and ashes to flail himself on the route to the Cathedral to do penance for the murder of Thomas Becket.
Posted by Quayquilter at 17:40 No comments:

Too clever by half

I am currently in the habit of using up the leftovers after completing a quilt top and this is my attempt. However if you think this looks unexpectedly odd the reason is that I glanced at the first page of Dorothy's "Just my size" instructions from her Pocketful of Mysteries site and thought I could see where it was going and read no further. Too clever by half as the blocks couldn't be set alternately because of how  I had made them so this row setting will have to do. Dorothy used a nifty construction method, one I shall return to. I now have one 10.5" block leftover and minimal scraps. Now I have to piece some leftover batting. . .
Posted by Quayquilter at 23:45 2 comments: 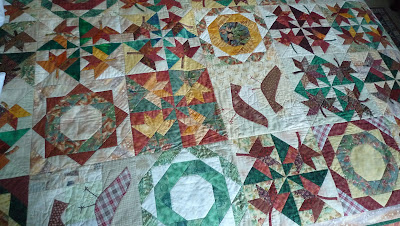 Autumn's here and the quilt's on the bed.
Posted by Quayquilter at 23:13 2 comments:

I added the remaining orange strips and the feature fabric borders today. Tomorrow I'll sew the back.
﻿
Posted by Quayquilter at 23:44 1 comment:

I originally planned to set the blocks together without sashing but in the event decided to half frame them in alternate mauve and turquoise fabric.

Like many other patchworkers I'm not just given to cutting up fabric and putting it back together again but have been fascinated by the possibilities of fussy cutting. When I made my first quilt, hexagon rosettes, early rosettes were cut anyhow but later,  like many others before and since, I found myself manipulating motifs and stripes to fan outwards or circle around. I noticed how in Jinny Beyer's block books (Her Quilter's album of blocks and borders is a wonderful resource) she used repetitive elements in border prints designs. Later I read a magazine article by Rebecca Collins where she cut up six identical cushion panels and joined identical pieces in a kaleidoscope effect. However the phenonomen really took off with the publication of  Bethany Reynolds' Magic Stack'n'Whack book though my favourite is the Stack'n'Whackipedia which uses fewer simpler shapes. This quilt was made from that book and started in a class with Bethany in Paducah. 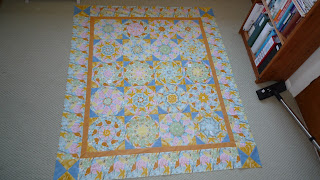 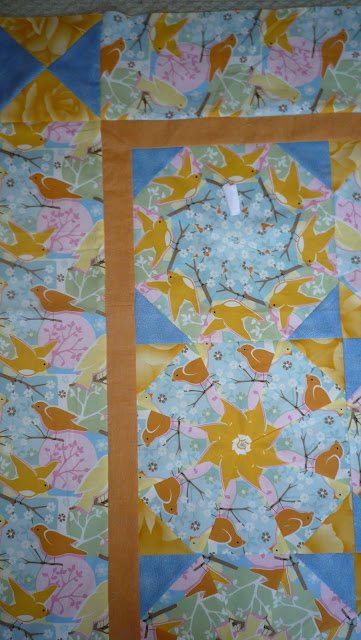 I saw her demonstrate blocks with four identical patches but my efforts really took off after a class with Judy Johnson  in Sisters, Oregon. She really was a wonderful teacher, strong on design as well as technique. The floral quilt was started in her workshop. Making this I learnt not to try to make all the blocks stars - some odder arrangements are good for the mix, a lesson I tried to apply to my current project.
﻿


Now I've started on a new project with a different look. I wanted lots of background space. The repeat is 24" which permits more variety and I bought 5+ repeats. Four sections are stacked up aligning identical elements (Judy showed clever ways to do this) and strips cut and then subcut into squares. Mine were 4 5/8" to make maximum use of fabric. Then the four patch fun starts - you can have four rotational arrangements, arrange mirror image or all the same way.

Posted by Quayquilter at 15:19 No comments:

I took Bryn's completed quilt into Quay Quilters for Show & Tell. I just love it. The batting is washed 80/20 and is soft and drapable and the cut up shirts provide a variety of textures and  the backing is a warm feeling seersucker fabric. It's homely but just right. The blue turquoise border matches the colour of his bedroom walls. 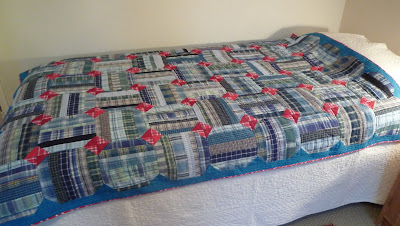 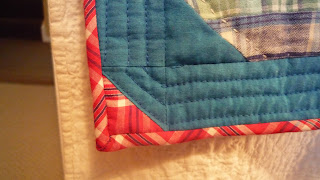 We were issued with another charity block to do and I completed mine today so I don't have to think about it till the next evening meeting. We were given the centre square and then added our own fabrics.

Bonnie Quilters met today having completed the centre block of the medallion quilt we are all making.

Posted by Quayquilter at 23:00 No comments:

On Sunday we went to Herne Bay and a show by a quilt and craft group in a super1908 church built on an expansive scale with more than a hint of Arts & Crafts. 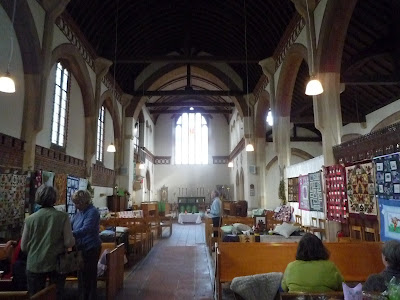