I'll finish off the old year with my last finish of 2010, a simple 24" prison baby quilt made from HST's leftover from my Galaxy of Stars quilts and look forward to the next with some white and batik Irish Chains and half chains which are part of the Quilt Show BOM.
Quilt Show
Finishing this quilt in 2011 will be a major project of that year. I'll be swapping blocks with a small group of friends and then it will be time to make the top. I'm making some extra units for a smaller cot quilt or similar.
Now to trawl through my 2010 posts in a quick review of the year.
Posted by Quayquilter at 20:27 No comments:

A priority was storage met largely
by my lovely "linen chests" with
four drawers each and three shelves
in the cupboard section.
﻿
﻿
﻿
﻿
﻿
﻿


I wanted an ergonomic working area and my electrically operated
height adjustable table meets my needs wonderfully with its press of two buttons range from 25" high to 40" plus for sewing at or cutting.
Love it!
Posted by Quayquilter at 19:01 1 comment:

I have just come up from a machine quilting session in my sewing room. This has been probably the greatest single improvement to my sewing life. I love my new neutral uncluttered room. I still have a bit more to to do but the transformation is nearly complete. I'll just post  before and after photos here and say a bit more tomorrow.
Posted by Quayquilter at 19:57 2 comments: 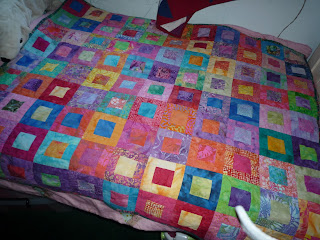 I spent Christmas with my daughter and family. While there I slept under a quilt I made for her. She said she loves it. I also received "commissions" for two more quilts as the children have changed rooms and moved to bigger beds. However it was lovely to see the cobblestones quilt I made for my granddaughter on her bed. 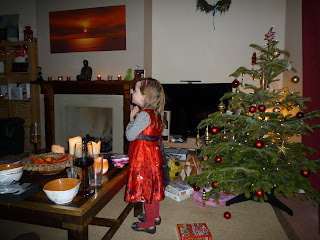 This is the owner. Her next quilt will be pink and lilac and feature fairies, ballet dancers or princesses or even all three!
Posted by Quayquilter at 18:43 2 comments:

The next bag that came to my notice held lots of HST units left over from my recent Katherine Guerrier projects. I can't believe how I came to make so many and decided I would use them for a Linus project. I kept making and adding units - broken dishes, square in square, pinwheels zig zags and then some to make this top all jumbled together. 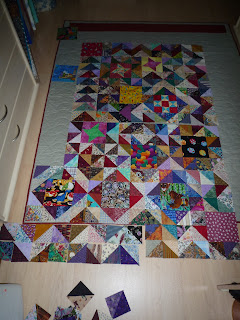 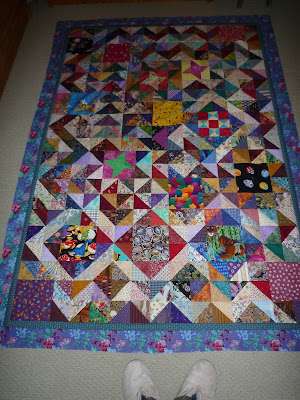 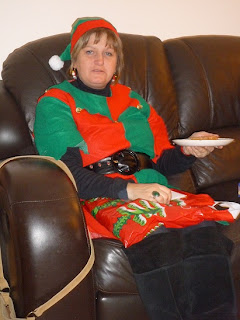 An elf came to our Crab & Winkle meeting and no it's not me in disguise.


Meanwhile that morning there was an uninvited visitor in our garden when I looked out of the bedroom window. 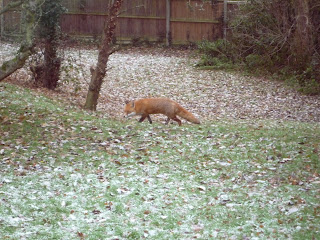 And on a patchwork note I have been sorting my sewing room and three wardrobe shelves are stacked with UFO's in boxes and ranged in bags in a large wicker basket. I've pinned a list of what is where  on the inside of the door to remind me and intend to complete one or two for every new project I start. I came across stuff I didn't know I had such as a batch of Mary's triangle units and cut squares leftover from the Quay Quilters' raffle quilt of a few years ago. I've used all of them with the addition of a few freshly cut squares to complete the four patches to make Linus (teenager) quilt top. It will stay as a top for a bit but at least the pieces are accounted for. Finding fabric for borders and backs is much easier now that all is visible on the linen chest shelves though I don't have many big pieces and I'm confining myself to stash. So this floral fabric was the best I could do from what I had and though I would never have bought it to complete the top I like it. 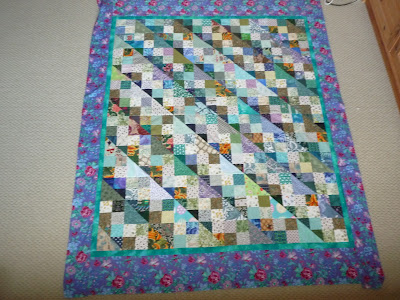 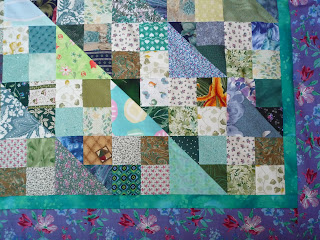 Posted by Quayquilter at 23:54 No comments: 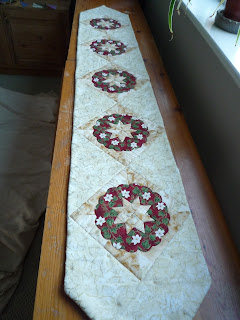 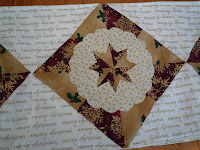 Here are Christmas table runners from a clever pattern by Jeanne Gentry in British Patchwork and Quilting magazine. A rosette of hearts is laid over a pieced pinwheel block. The details are from friend Fran's - she has made loads. Mine has insulbright heat resistant wadding in the middle and is bagged out rather than bound. The bondawebbed rosettes provided useful machine applique practice with my new Janome Horizon machine. 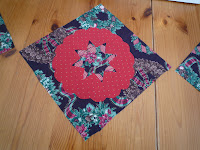 Posted by Quayquilter at 18:39 No comments: 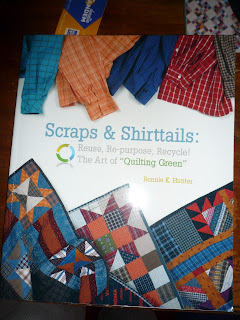 Well I've posted all my Becky's 9-Patch work to date. There are other possibilities to explore. To speed up the sewing process still further a 3" finished square could be substituted for the corner unit. I thought I was the only person who had picked up on this pattern so useful for working with 3.5 and 2" strips and thought of emailing Bonnie Hunter of Quiltville http://www.quiltville.com/ as using precut strips is so much a hallmark of her work but looking through her book "Scraps and Shirttails" I realised the Bargain Basement quilt was made from Becky's 9-Patch blocks though she has given them very much her own stamp so I didn't recognize them immediately. Bonnie has been and is hugely generous to the online quilting community and it was through pressure from her many fans that her ideas took book form, first "Scraps & Shirttails" and next "Adventures with Leaders & Enders" and I believe more will follow but she still continues with an online presence.
Anyway tomorrow back to current quilty events in my life in less exhaustive fashion.
Posted by Quayquilter at 20:57 1 comment:

Here pictures of the two quilts made with Oast Quilters 54" by 72". I could have joined the sets 3 by 4 to achieve the same measurements but preferred to make two quilts instead of one and add a 9" border. One is backed with striped cheesecloth surprisingly successful and the other is bound with it.
﻿
﻿﻿﻿﻿﻿﻿
﻿﻿﻿﻿﻿﻿ ﻿
This is my penultimate B9P post. After tomorrow it will be back to current sewing though I am sure I'll return to this block in due course - I have one or two more ideas up my sleeve.
Posted by Quayquilter at 22:33 No comments: 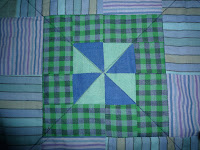 ﻿ ﻿
I'm getting to the end of Becky's 9-Patches now. I have made or rather made up so many as they have been the subject of charity workshops making Ami Simms' Twisted Sisters quilts in the morning and Becky's 9-Patches in the afternoon. I still have two from an Oast workshop which I'll photograph in full in daylight tomomorrow but so as not to break the chain of posts here are pictures of yet more centre variations:
Posted by Quayquilter at 20:26 No comments:

With the group I belong to, Quay Quilters, we made a charity quilt 2 sets by 3 with 9 inch borders so it still ended up 54 by 72".
We also altered the corner treatment with a counterchange tactic edging one colour square with another colour and vice versa. 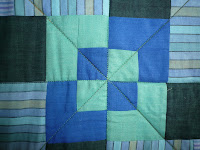 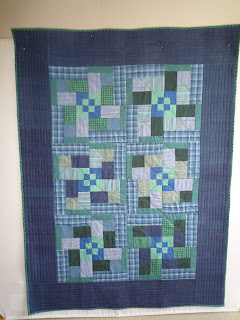 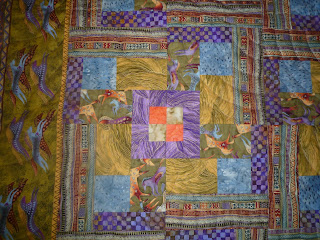 Here are the blocks joined into a set in the quilt. I called it "Strange Horses" after a poem by Edwin Muir.
I feel this pattern with its relatively few matching seams and speed of assembly lends itself particularly to charity quiltmaking. I selected fabrics with males in mind. Not many people make teenager quilts for Linus yet they are in demand and I think boys are less well catered for than girls. Also 9" blocks arranged three sets by four finish at 54" by 72" the preferred size for Quilts of Valour in the UK and the pattern is self bordering. 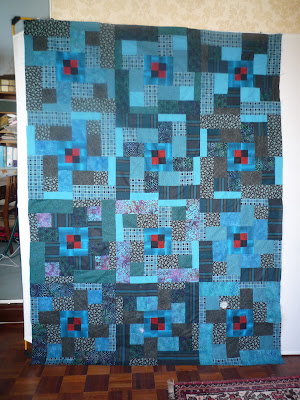 Here is a quilt made for Project Linus with members of Rambling Roses quilt group. They were given a precut set centre kit and then made up their blocks from their own selection of cut pieces. There were certain rules such as no repeated fabrics and no more than one batik which caused some chafing.
Posted by Quayquilter at 22:44 1 comment: 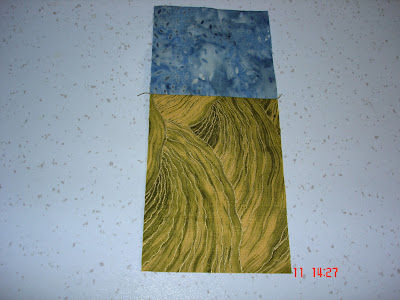 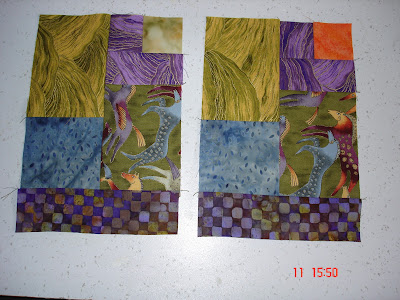 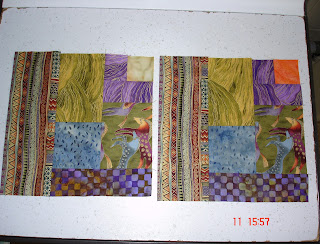 Posted by Quayquilter at 20:04 No comments: 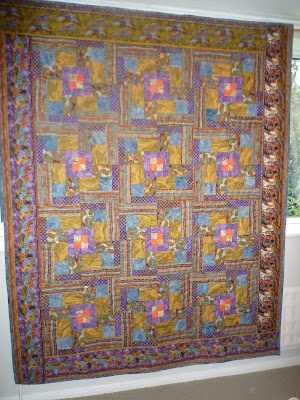 This is the quilt I made for the magazine, this time with a four patch emerging in the centre and with an added border. This pattern is self bordering but the Laurel Burch mythical horses range I used had an interesting border print which I used  for the border. Notice how the border pieces are added with partial piecing, circling round the quilt.
Even though I was in America choosing these fabrics I found it very hard to find 6 or 7 I could use together. In the fabric shop I felt like a rabbit caught in headlights.
I used a consistent placement of fabrics checking I used the same section of striped border print in each set. Also even the waving grass fabric was directional so I paid attention to the placement of this as well.
Posted by Quayquilter at 23:03 1 comment:

I seem to be keeping pace with my B9P posts and the days of the month though I'm not sure if I can stretch it to the 31st. .  Anyway here are some more B9P quilts, one made by Maggie, also from shirtings which she uses to cover her salestable. She had her own ways of managing stripes. Liz made hers amazingly quickly as a present and used contemporary fabrics consistently throughout the blocks. She also added a border.  Because of the repeated fabric placement she worked out a more streamlined method using some strip piecing and rewrote the instructions accordingly. I try to mop up some of my quilting energies by making charity quilts including yard square ones for older prison babies and the pattern lends itself readily to this. I used some pretty coordinating pastels also in a consistent placement.
﻿
﻿