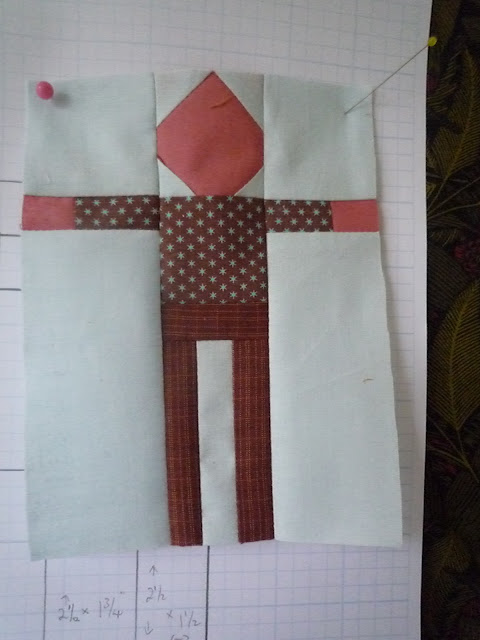 I am making ten different "Little People" for a swap, a tall order. This is my first - ruddy complexioned farm boy. He is poor and has a limited sense of style. He is a homely character. His shirt is fabric my mother cut out for a pair of trousers but never made. How much still to do will I leave behind, I wonder. Making the prototype took some time - I had hands next to the torso and one young man wearing only part of his trousers but now I have a Ford assembly line going.
My husband is normally quite supportive of my projects but on being shown Farm Boy he shook his head as if there was no hope left for me. I told him it was for a swap leaving him to reflect there are at least six other lunatics out there! 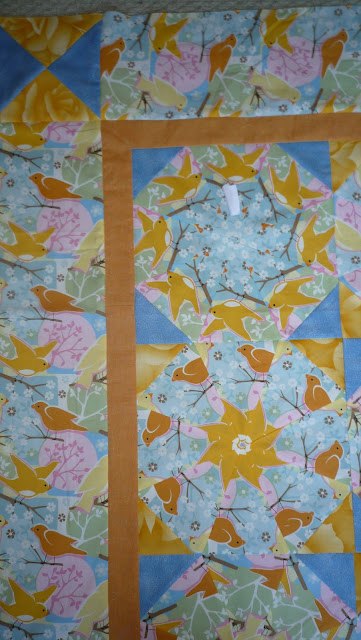 Meanwhile I have been getting on with my own work, finally adding the border to this birdy quilt started in a Stack'n'Whack workshop with Bethany Reynolds in Paducah. It's very jolly. I pieced the backing and made blue binding. Now to sandwich and quilt it.
Posted by Quayquilter at 22:44 1 comment:

The Usual Suspects spent a weekend away in a country cottage with a wonderfully cut off air to it - surrounded by lots of empty space, empty that is apart from numerous rabbits, a fox and a pair of green woodpeckers. I spent a good chunk of time working my way through the 222 stitches on my newly acquired Pfaff  to make a sample book for for future reference. On Sunday morning when I was finally sewing on a project it made a nasty noise and ceased to work. Thread is obviously caught up in its insides but the insides were not accessible without a specialised screw driver. Anyway last night the sewing machine man came to take it away to look at. I hope its OK as it's a beautifully engineered machine  and although there's still quite a lot to learn I know I'm going to love it - Pfaff Quilt Expression 4 , bought from a friend whom I know looked after it perfectly. Anyway here we are.
Posted by Quayquilter at 15:05 No comments:


Quay Quilters met for our AGM and I marked the occasion by finishing my block for the group quilt. Now I have to sandwich and quilt it and do our chairperson's as she doesn't hand quilt.
The spidery quilt was made by Mags for her grandson following a seminole class with Mandy Munroe. The webs are done by hand, not printed.
Posted by Quayquilter at 22:18 No comments: 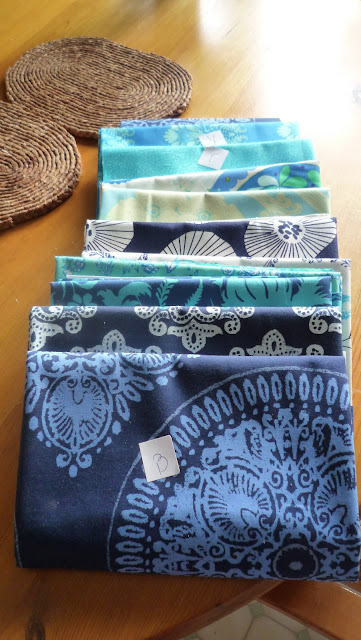 The post today brought a hungry animal alphabet panel and from Web Fabrics fabrics chosen specially for me for a BOM - I opted for modern colour blue. The lovely white on white background arrived earlier. I can't imagine I would ever have been bold enough to chose this particular combination. I'm really looking forward to working with them.
Posted by Quayquilter at 23:36 2 comments: 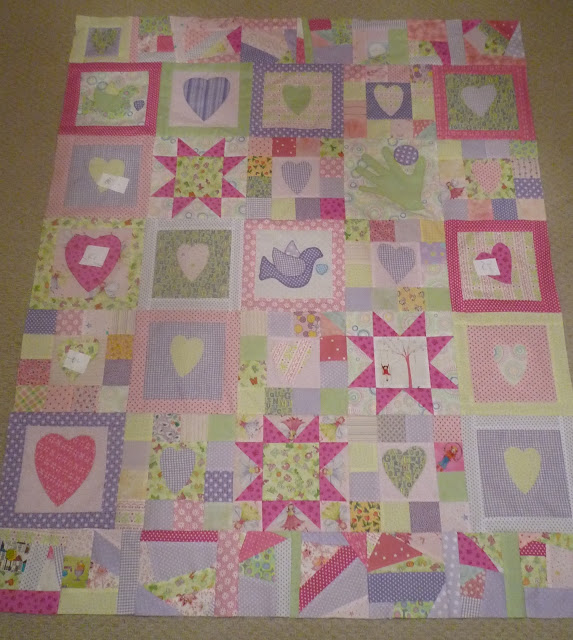 I was determined to finish this quilt top today and I've just sewn the last seam. I might  add a border if I can find suitable material in my stash but for now enough! It uses up reject blocks from Isla's quilt and the cut away applique hearts are recycleby reverse applique. Then I the cut out bondaweb background hearts were appliqued yet again. If only it could be magically quilted. It might sell or it might become a charity quilt. I need more relatives! The hand is my grandson's - I used a different colour for his hand in the main quilt and the "ball" is the rejected centre of a flower. Waste not want not. Fabric scraps and "cheese" have found their way into crazy blocks which serve to make the top oblong not square. I like this kind of playful patchworking, not agonising too much but a bit. However if only it would magically quilt itself! I still have loads of 2.5" squares and will make a couple of small prison baby quilts as the leftover backing from Isla's is just the right size.

Last Friday Crab and Winkle met and Mary consulted about her Cherrywood beach huts quilt made with Cherrywood jelly roll and FQ's, a present from the group for her significant birthday. She'd also made a cushion for her daughter. We also admired Maggie's Noah's Ark quilt. What a lucky grandchild.