﻿ Tonight was Quay Quilters AGM. Helen brought in the quilt she'd made in Ann's machine applique workshop and another for a wonderful friend.

I have made three pennants/banners as part of an Olympics project for 2012 mainly because I'm an inveterate joiner and as part of a Janome Club project and it was as ever a chance to practise stuff on my machine. However given the size of competitors' goodie bags and luggage allowances I suspect my efforts will be left in a corner of an hotel room or Olympic Village accommodation.
We chose subjects redolent of Britain. The London fabric (designed in NZ!) was a gift in this respect, a nice cup of tea is another aspect and the stairs of the third piece relate to the winners' podium and to London Cockney slang where apples and pears (which grow here in Kent) is an expression for stairs - "Going up the apples and pears"..... 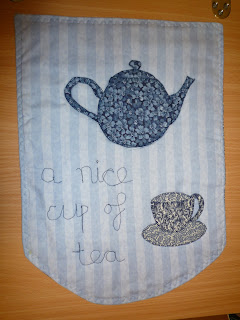 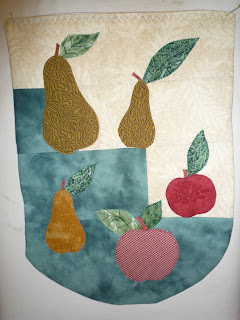 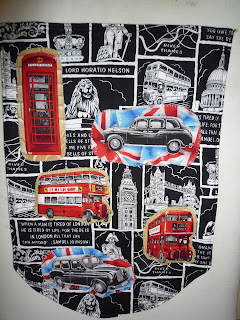 On Thursday I took a Quilters Guild class with Terence Gilbert who used to belong to a group I've been in for 15 years or so. They hold beginners classes from time to time and although they now include rotary cutting etc originally the emphasis was on drafting, templates and blocks. I always look back with gratitude to these classes as they underpin everything I do now though I rarely resort to templates. Did I just say that? - well I forgot I am making my farmers wife blocks using just these methods though lazily I'm just drawing round the ones friend Trish has already done. We'll have more than a 100 by the time we've completed all the blocks.
Anyway Terence holds true to the Quay Quilters' path and just loves those templates, the quilter's wheel (everybody should have one!) but also devising new ways of using them and with the Spinning Stars developing more and more takes on the original idea. With the original publicity I'd seen a photo of one of the quilts, took a photo of it myself and took fabrics accordingly so that was what I chose to do though with all the chat and demonstrating I only completed one block set - eight or nine more to do to complete a Linus quilt. I cut several layers at once with scissors  (drawing and cutting 192  separate shapes did not appeal) and perhaps that is why my block is not as accurate as I should like. I think I would abandon the template route and opt for foundation piecing  for any future attempts.

Posted by Quayquilter at 13:46 No comments: 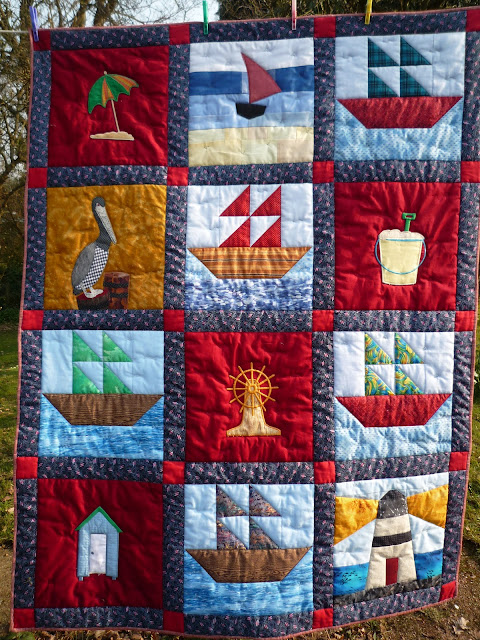 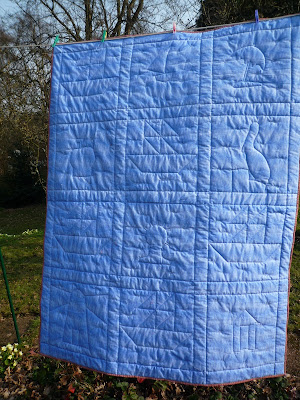 I went to a class yesterday and was able to hand my Lilac  Linus and HST quilt over to a participant who is in the same group as our local Linus lady but unfortunately I still had a bit of binding to sew down on this one which I finished last night. It's made from 10 blocks collected from the Linus stand at Festival of Quilts here in the UK to which I added the pelican and the lighthouse both from Quiltmaker magazine (109 & 110). It's number 103 (d) on the Quilts of Mine list. I group smaller quilts and quilts others have had a hand in under one numder but make sure the total adds up to a good size bed quilt equivalent. This one measures 44 by 58 inches.
As for the Spring start? I went on a farm visit with 8 other U3A members this morning and saw this second of twins being born very quickly. I also show a cleaned up version. It was a perfect warm Spring day and we learnt a lot and got the chance to bottle feed the orphans.
Posted by Quayquilter at 15:20 1 comment:

Just back from a lovely 10 days in Madeira. The weather was mixed but there was so much luxuriant greenery and brightly coloured flora. I may even make a small wallhanging based on the photos I took of many different varieties. I found lots of inspiration for quilt designs in the pavements and other architectural details. I shall go again next year and catch up on some of the ones I didn't get round to photographing. 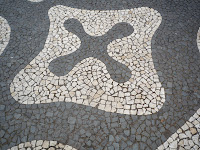 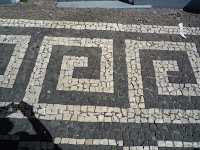 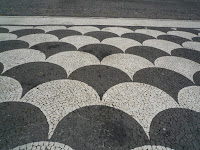 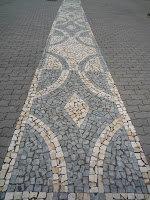 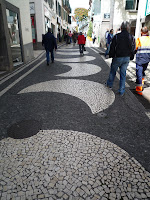 Posted by Quayquilter at 19:35 No comments:

I realise Crab & Winkle's regular evening meeting is coming up and we are having a sewing day on Thursday but I haven't written about our last get together at Marion's house.

Marion showed a sample top for an upcoming workshop she is teaching while Maggie has been making items for which she produces patterns and which set off the fairtrade fabric she sells. Mary was very taken with Jenny's convergence corner at Oast and has started her own version using gorgeous fabrics.
Posted by Quayquilter at 20:45 1 comment:

I've had a very quilty weekend starting with a quick trip to the annual Puddleducks and Quercus Quilters Quilt Show on Saturday morning. http://www.puddleducksquilts.co.uk/ My visitor's choice was Jane Tandy's off centre log cabin with its restrained use of colour and pattern. The off centre blocks are not usually a favourite of mine but I thought this was very successful. 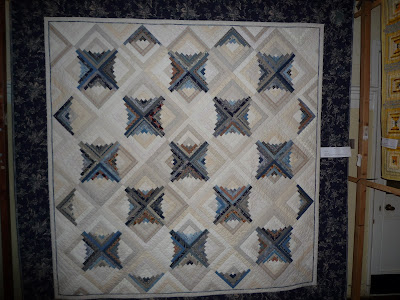 In the afternoon it was our Oast meeting http://oastquilters.co.uk/ here in Canterbury and Edwina McKinnon talked and showed her quilts. I'm sure everyone enjoyed it. There was a great variety of work, very inventive and covering a wide range. Beautiful work. http://edwinamac.blogspot.com/
This quilt was the topic of the workshop next day which I attended. Judi and I worked on a joint project ntended as a Linus children's quilt 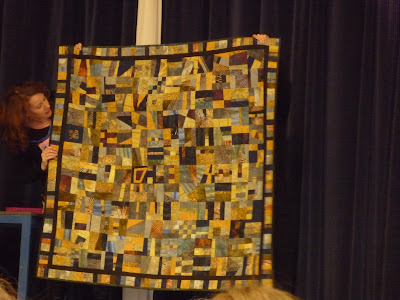 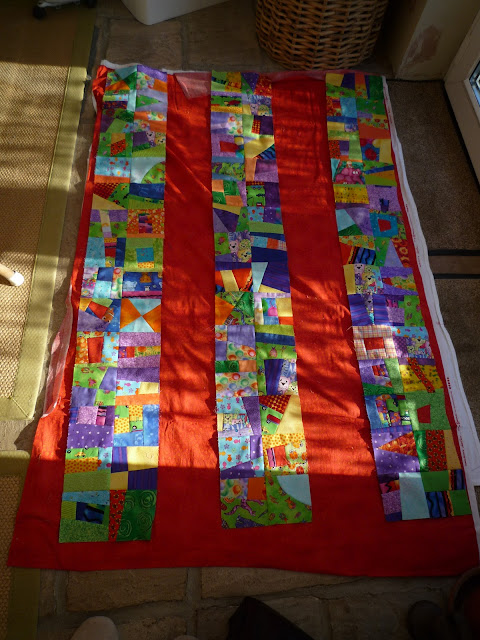 Today the Usual Suspects met and we finished the blocks and pieced them into 4-Patches and three panels which will form a strippy
Posted by Quayquilter at 20:55 1 comment: 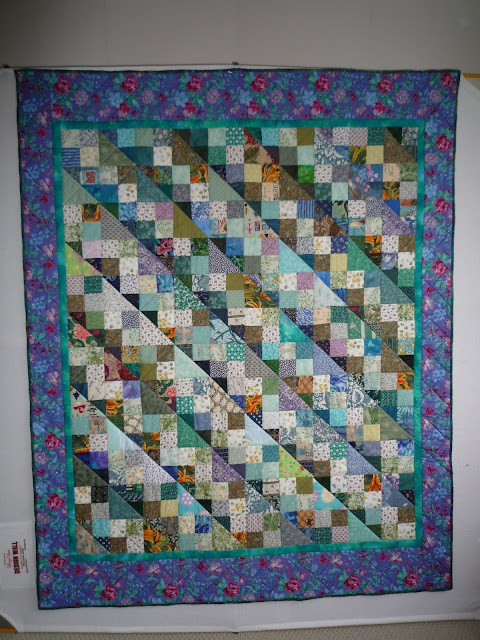 I think I may have posted this quilt in "top" stage but it is now complete and is destined for some charitable purpose or other. I found a bag of Mary's Triangle units and lots of single squares in a bag while kitting out my sewing room. They were leftover from Quay Quilters' raffle quilt some years ago. I sewed the squares into 4-Patches as leader enders and combined with the Mary's Triangle units to form a diagonal pattern I used up every piece, adding a couple of squares from my own fabric and the border at the end. It's down as QQ Lilac Linus on my 2011 finishes list.
Now my fabric is folded on shelves in cupboards I can access it more easily and am making myself use stash rather than new purchases though I have bought longer lengths for backings. 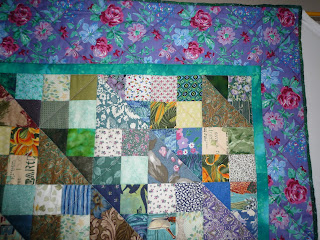 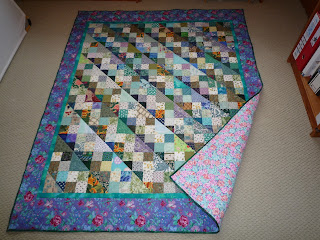 ﻿﻿
﻿﻿
﻿﻿
﻿﻿  At Festival of Quilts last year I collected a bunch of 10 Linus blocks which I laid out with two spaces for which I have made blocks. I'm a piecer but am slowly discovering the joys of fusible web. At the Janome class I learned the Heat'n'Bond brand doesn't separate like some and I also tried some stitches suggested on Sunday to secure the pelican pieces. The lighthouse is foundation pieced. I'm currently auditioning sashing. It pains me to break into fabric sometimes but I'm being strong about it. The patterns are from Quiltmaker magazine (109 &110).

Posted by Quayquilter at 00:36 No comments: