I am working on disappearing D9P pieces for a class I am going to teach. I have made a basic three fabric one and now am using precious pieces of Kona Bay and other Japanese style pints in a scrappier version. One more to come before I move on to the interesting bit, the variation which will be the chief focus of the class. However I will get the students to do a couple of basic ones from my fabric kits and they will be yet further strategies.
I'm using a border print for the borders

Our Jackie Taylor Civil War quilts are coming along well. I am going to do Flying Geese borders and have elected to go for dark geese and paler skies. I shall quick piece four at a time and make four piles one for each border. 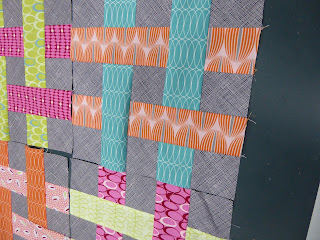 Posted by Quayquilter at 23:42 No comments:

Before the retreat we had our  bi-monthly Sewing Day at Lower Hardres, Usual Suspects and friends.. It is late being posted as my charger give up the ghost.

Posted by Quayquilter at 08:27 No comments:

Jill's Quilt of the Crosses in the making


Posted by Quayquilter at 08:26 No comments:

What I did on the Quilting Retreat

This was the third retreat of the year and five nights and days of sewing interrupted only by daily walks and shopping trips as there was a well stocked quilt shop locally. As I knew we were going to have two tables each I took major projects I wanted to move closer to completion. Some stages of quiltmaking are hurdles to get over I find and the long retreat days were the necessary push. I was one of the two packing up at midnight.

I framed each Bonnie Blues block (2015 project) and trimmed to 14", then sashed them, sewed the rows and bordered with my focus fabric plus a thin strip of orange mitring the corners.  I am really pleased with the result and know my husband will like it as blue is his favourite colour. The top is wider than it is long because that is how it will go on our bed which has a footboard.I didn't want the house and mountain and bargello to be sideways on.
I also added two unpieced borders to the current Bonnie project, Jackie Taylor's Civil War pattern. partly to bring it up to a size divisible by three as the final border will be 1 1/2" by 3" flying geese.
I had to do quite a bit of partial piecing in the corners as I wanted o sew the cheddar and red strips together before adding them to the borders and the black cornerstones necessitated some juggling.

In between these efforts I completed my own Split 9-Patch+ kit and sewed the top in preparation for a workshop next year. 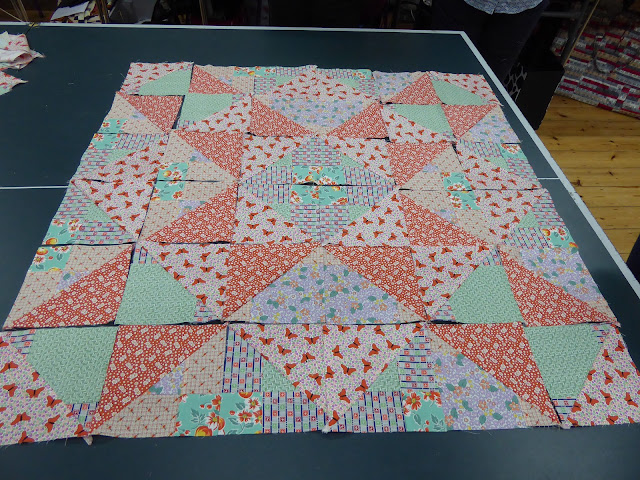 This was a group effort


So time well spent plus good friends , exercise and fun.
Posted by Quayquilter at 08:13 1 comment:

Two weeks ago I finally managed to make it to a Quayquilters' meeting where we were sewing heart cushions but before we embarked on that we had some Show and Tell.

Posted by Quayquilter at 11:38 No comments:

Posted by Quayquilter at 16:54 No comments:

Today we embarked on  a converge panel designed by Brenda Dean and published in Popular Patchwork in May 2018.


Posted by Quayquilter at 16:38 No comments:

Led by Margaret the students had gone home to p[lay with disappearing four patches with lots of interesting results.