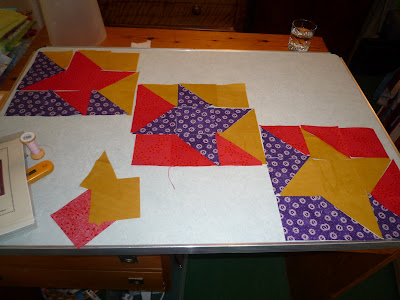 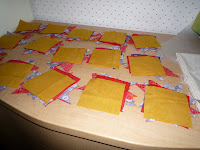 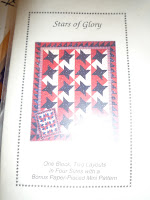 I have started a new project which as it involves lots of chain piecing I hope to do somewhat leader ender style in the manner of Bonnie Hunter of Quiltville fame. http://quiltville.com/ (Her "Adventures with leaders and enders" was one of the titles I purchased at Malvern.)  It's for a friend of my daughter's baby,  the friend's baby that is. Start again: it's for my daughter's friend's baby! I've fished out red and purple fabrics bought at Houston and struggled to find a third but settled for a Cherrywood mustard. The baby is growing apace and will be demanding a single bed size if I don't get a move on. At Malvern I bought one of Lady Sew & Sew's bargain 5 metre pieces in a super scarlet to use for the backing and supplement the red if I run out but I don't think I will. I wasn't sure about fabric placement so laid out the three possibilities and have opted for the purple stars which coincides roughly with the pattern, also shown here. It's simple but clever.
http://www.etsy.com/shop//bcheri?page=3
I cut out more block "kits" and then spent time outside in the sun drawing the pattern for myself (a good way to get a grip on the layout) and working out the pressing regime, something patterns rarely tell you. I do keep getting those patches of light on my photos. I can see them on the camera viewer screen but however much I move round to change angles I can't seem to get rid of them.
Posted by Quayquilter at 19:02