Quay Quilters met yesterday. I was my turn to teach our beginner (log cabin) so I took little part in the main activity of the evening which was putting our group quilt together. My contribution to this was to casually remark on the way to make the tea "Oh you're doing zigzags then". Great consternation as they weren't doing zigzags but squares . Some of the rows were wrong after all the careful arrangement and had to be rearranged but the result is still fine. In the midst of all this I omitted to take photos and anyway it hasn't all been joined yet. At Show and Tell Vanessa showed a wonderful quilt where the pattern has been created by discharging with bleach and she has done some amazing regular patterned free machine quilting but following markings. Helen had made some luscious tissue boxes employing the folded flowers she'd shown us earlier. I have finished a bag intended for the Oast bag tombola but it hasn't turned out as well as I hoped; it was like a drssmaking pattern and I meticulously transferred all the seam markings and all went well until the last stage - top stitching round the strap and of the bag. the first side was fine but for the second side I had far too much of the main fabric. How could that be from the the same strip of fabric? I remain mystified but managed to bodge and ease but  it isn't as neat as I would have liked. And the fabrics were lovely too - for the bottom part of the gusset I used a coordinating fabric with an appropriate message. 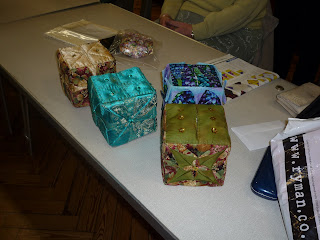 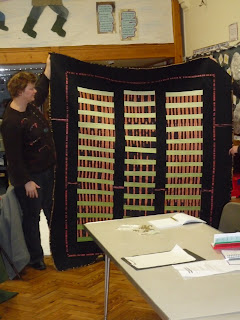 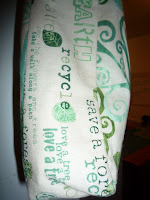 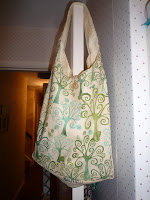