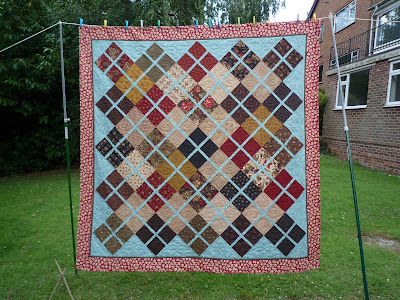 This week I've been sleeping under my latest finish which has been in the works for over a year: Josy's Quilt. I always planned to make a quilt for her but always got sidetracked and it was supposed to be a lap quilt but it got bigger. I used the sandcastles pattern from Teri Christopherson's Black Mountain Quilts book or the picture anyway. I like the fact it looks as if made from fourpatches made from four different fabrics joined with narrow sashing whereas it's really a block of four identical squares with a central cross of "sashing". I thought buying four identical Moda Jan Patek charm square packs was a good wheeze and I made up the blocks in Ocean Shores NSW where we were house swapping. It was a very quiet remote spot so I had lots of time and was very grateful for the use of a sewing machine. Putting the blocks together came later, then a period of agonising over how to border it especially as the fabric line was now defunct but this turned out to be a good thing as the completely non coordinating red and gold lifted it. Then it took a long time to hand quilt. I've just sewn on the label today another first as the lettering is the alphabet on my Janome. I knew it had an alphabet but didn't really believe in it. It was very straightforward though I expected the machine to work across rather than up and down. Anyway it will go in the show and if Josy attends it will be the first she knows about it.
Posted by Quayquilter at 19:39

it's a lovely quilt!